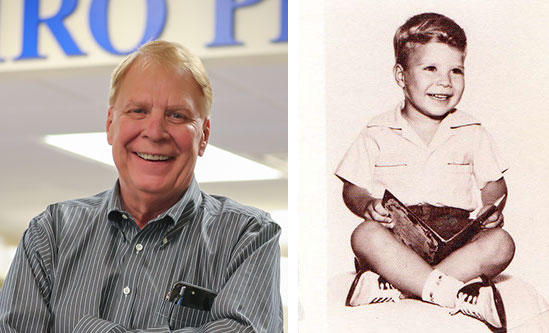 KEN BRESSERS, RPh Rho Chi
Ken purchased Omro Pharmacy in January of 2000. Originally from Milwaukee, he came to Omro somewhere around 1990 and planned on staying just a few months to help out the former owner, Dennis Hunt. Evidently he liked it here! Ken has worked for independent community pharmacies since 1965 and graduated from the UW-Madison School of Pharmacy in 1975. Among several other honorary positions and endeavors, he served as a member of the Board of the Wisconsin Pharmacy Society and has been a clinical instructor for the Concordia School of Pharmacy. Throughout the years and even to this day, Ken is very active in and is continually a benefactor to all of the Omro area civic organizations. When he is not busy working, he enjoys spending time with his two sons, Bob and Kenny and his grandson, Quinn and his beautiful granddaughter, Bella, attending theatre performance, watching films and being single. 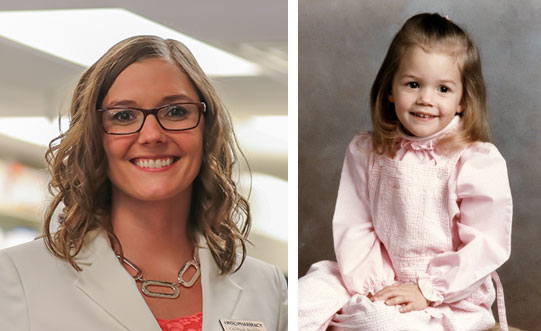 CALI FELIX, PharmD
Cali Felix began working as a full-time pharmacist at Omro Pharmacy in April 2016, but has been a regular part-time pharmacist here for several years. Cali is a 2008 graduate of the University of Minnesota with doctorate of pharmacy (Pharm.D.). She has special interests in Long-term Care and veterinary pharmacy. Cali lives in Oshkosh with her husband, Eric, and their two dogs, Diesel and Benzo. In her spare time, she enjoys dance and spending time with her family, especially her young nieces. 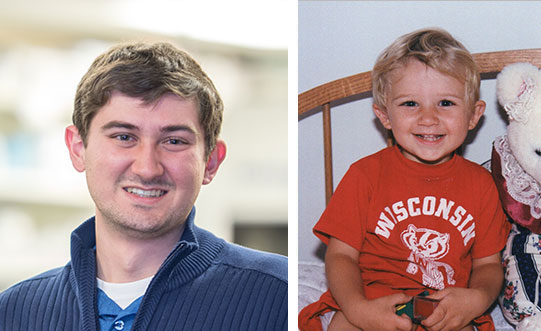 PATRICK BEIERMEISTER, PharmD
Patrick started working at Omro Pharmacy as a pharmacist in the summer of 2018. Prior to Omro Pharmacy he worked as a pharmacy intern at Walgreens and St. Vincent de Paul Charitable Pharmacy while attending pharmacy school at UW-Madison. In his free time, Patrick enjoys watching (and attending) as many Badgers’ games as possible as well as hiking and visiting national parks. 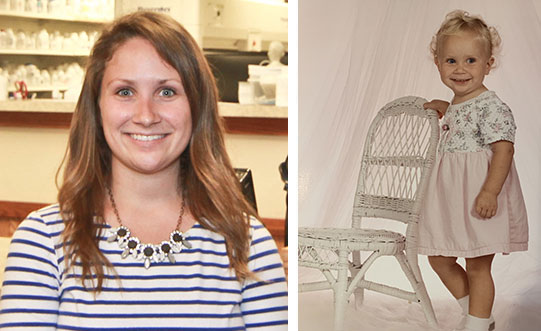 Kristin graduated from UW Madison School of Pharmacy in May of 2019, and began as a pharmacist here at Omro Pharmacy in July 2019! As an Oshkosh native, she is happy to be back close to home. In her free time, she enjoys spending time with family, friends, and her boxer-lab mix, Olive, as well as running and watching true crime shows! 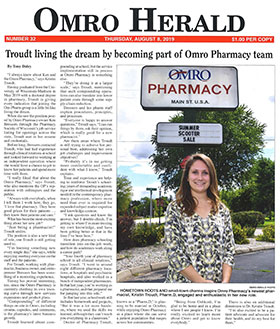 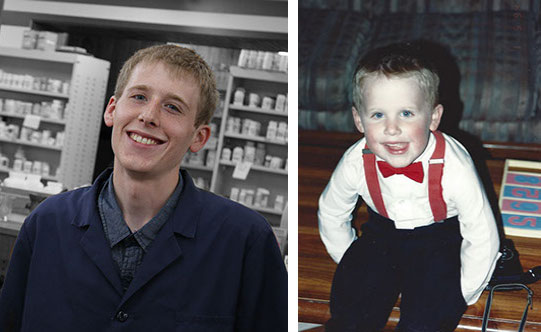 MATT “HOOPER” HOPPER
Matthew started at Omro Pharmacy as a cashier in July of 2013. He now helps operate the national contract department. He enjoys hiking, reading, and spending time with his girlfriend. Ken’s nickname for Matthew is “Hooper.”” 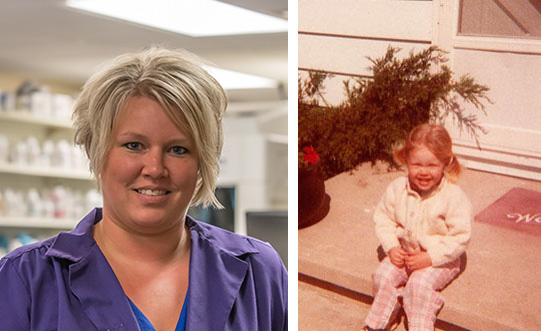 ANGIE
Angie is our lead technician and has been with Omro Pharmacy since May 2003. She enjoys family time with her two sons camping, four-wheeling and boating. 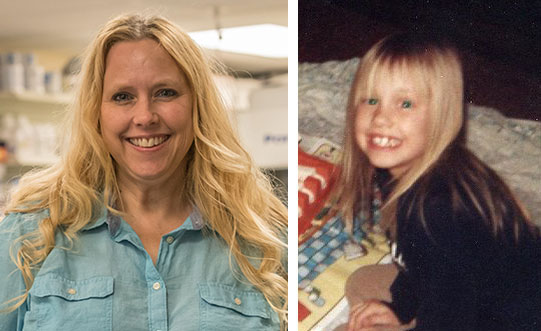 TINA B
Tina started working in a pharmacy in 1991 as a pharmacy technician. She joined Omro Pharmacy in 2016. Tina loves spending time with her daughter, Kelsey and their many animals, especially her two dogs, Riley and Lilly. Also she enjoys watching movies and hunting for Pokemon. Ken’s nickname for Tina is Hotdog. 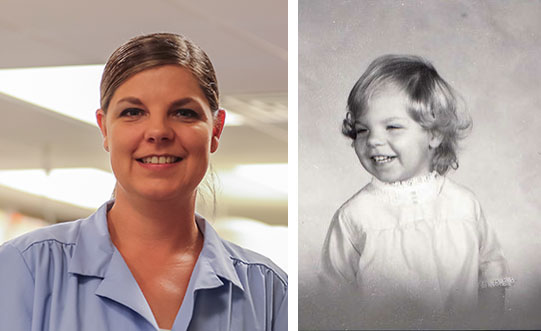 DANETTE “THUMPER” “DOUGHNUT” HALDER
After working at Haase’s Supper Club for 18 years, Danette a.k.a Thumper a.k.a Doughnut joined Omro Pharmacy in August 2010. She takes care of filing all mail and deliverys here at the pharmacy. 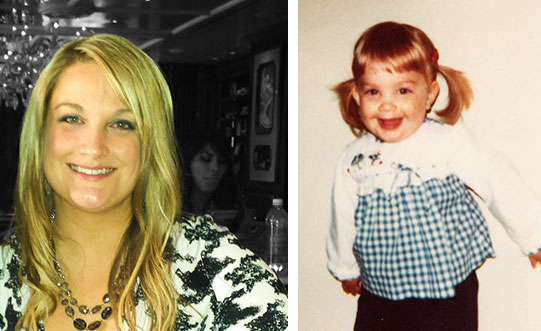 SHANNON “SHA NA NA” EHMKE
Shannon Ehmke is the operations manager and privacy officer of Omro Pharmacy. She originally started as a cashier while in high school (1998!). She graduated from UW-Oshkosh in 2005 with a bachelor’s degree in journalism with an emphasis in public relations and advertising, and returned to the pharmacy in 2007. She is a huge fan of the Packers, Badgers and Brewers and loves traveling. Ken’s nickname for Shannon is “Sha Na Na.” 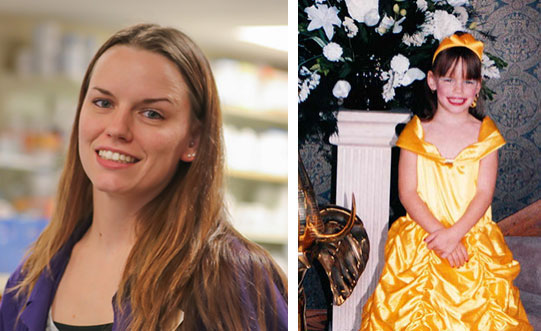 LISA “WEIRDO”
Lisa started working for Omro Pharmacy in September 2013. She has a Bachelor’s degree in Healthcare Management. She assists in managing the Long-term Care facilities that we service and in home packaging offered to our patients. In her spare time, she enjoys spending time with her husband, Mark, son, Zeke, and daughters, Koraand Aowyn (Owl). She also enjoys cooking, baking and spending time outdoors with her family and two dogs, Godzilla and Tiny. Ken’s nicknames for Lisa are “Louie, Weirdo, and Mimsy.”” 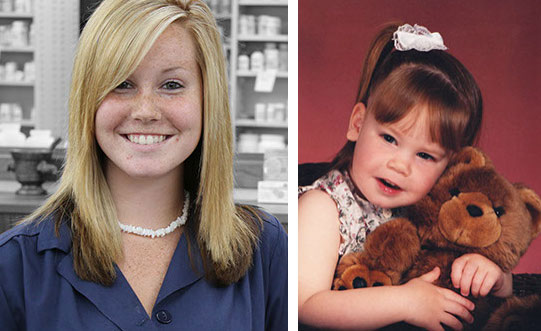 BROOKE “THE PUPPY”
Brooke has been here for almost 6 years come this September 2019. She is our ostomy and billing specialist, she takes care of all ostomy supplies and the billing to insurance for them, She also takes care of the billing for DME (Durable Medical Equipment), diabetic shoes, and Managed Care Programs. Her nickname at the pharmacy is Pup Dog as at the time she was the youngest working in the pharmacy, which she no longer is the youngest! YAY! 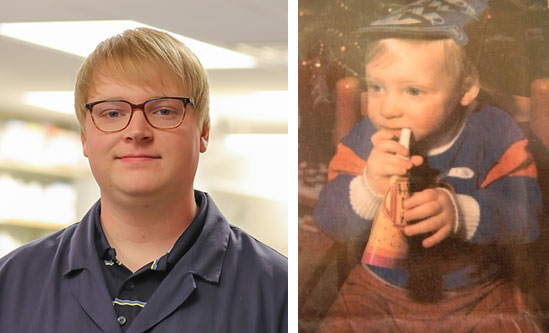 MATT SCHMUNK
Matt began at Omro Pharmacy as a cashier in 2008 and worked his way to becoming head of shipping and delivery. He also helps with IT/computers. In the eight years that he’s been with Omro Pharmacy, we know that he likes the Milwaukee Brewers and long walks on the beach. Give him another eight years and we’ll tell you more about him. 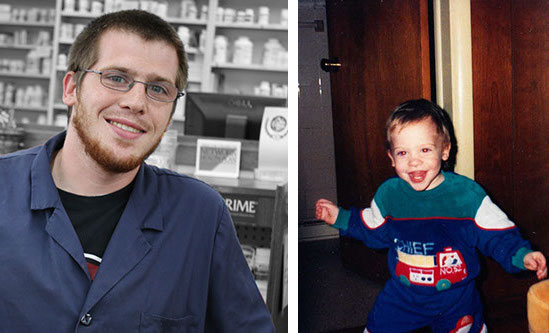 AARON “LIGHTWEIGHT” HATOPP
Aaron began as a cashier in 2011. Nowadays he is in charge of the national contracts department. When he’s not at Omro Pharmacy, Aaron enjoys video gaming and hanging out with friends and family. 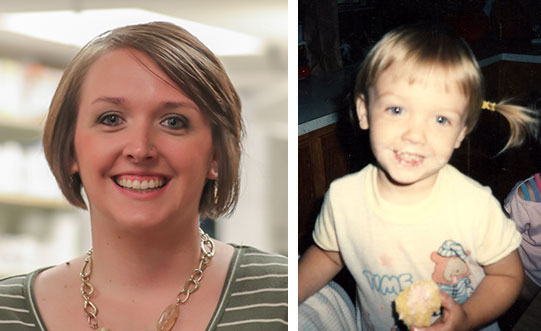 HEATHER
Heather is our compounding technician her at the pharmacy. She joined our team in March of 2017. She has quite the unique job, yet very important job. Since we are a compounding pharmacy, we make all sorts of different medications. Heather has gone to Houston, Tx to learn more about compounding. Since then she has excelled in her skills. When she isn’t at work she enjoys spending time with her husband and her two boys. She enjoys going camping, hunting, and fishing. If you see her here at the pharmacy say hi. 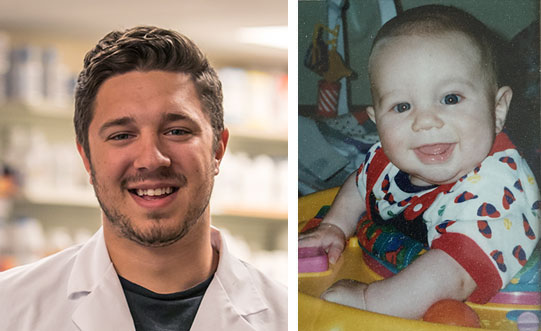 REID
Reid started working at Omro Pharmacy during the summer of 2015. He started out as a pharmacy technician, but works wherever he is needed. Reid has been going to UW-Oshkosh for the past few years, but is now going to school at UW-Madison to become a pharmacist. When Reid is not working or at school, he enjoys traveling the world and hanging out with friends and family. 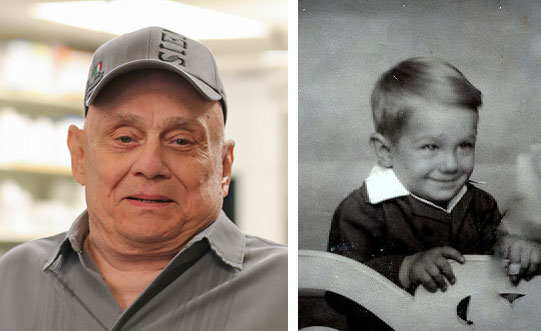 AL
Al has been working at the pharmacy for the past few years. He works on Wednesdays in the soda fountain scooping ice cream for all of our customers. You may know him, because he use to own the Main Street Restaurant which is now Los Amigos. When he is not working at the Pharmacy he enjoys watching the Brewers and Packers, and spending time with his grandkids. 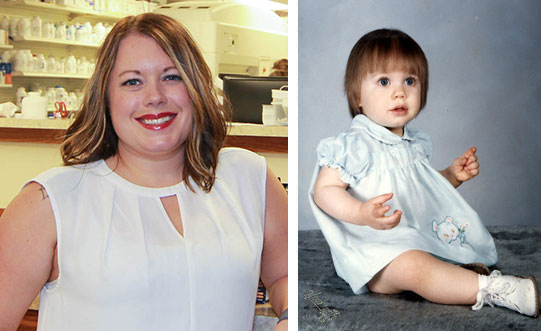 SARAH
Sarah started at Omro Pharmacy in January of 2017 as a pharmacy technician. She is now one of the main voices you will hear on the other end of the phone when you call the pharmacy. Sarah has two wonderful sons, Hudson who is 6 years old and Jameson who is 2 years old. They keep her very busy and very happy. In her free time she loves spending time outdoors with her family and friends and loves taking pictures. She has been a hobby photographer for 17 years. 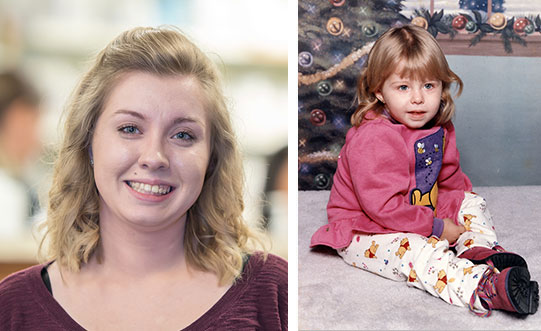 BRITTANI
Brittani started working at Omro Pharmacy in October of 2017 as a Pharmacy Technician. She loves spending time with her daughter, Addeline, and is preparing for her wedding. She also has a puppy named Nala. 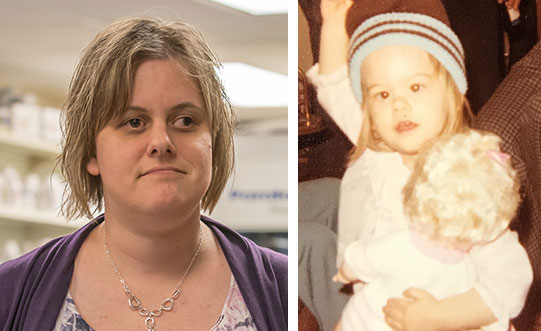 INGRID
Ingrid is our accountant and diabetic footwear specialist. She joined our team March of 2017. When she isn’t doing the accounting, she is usually fitting someone with Dr. Comfort Shoes. So if you’re diabetic and sick of trying to find shoes that are comfortable and fit good come see Ingrid, she will get you all set up with some great shoes. She also is the owner of the Omro Pharmacy mascot (toy poodle named Lily). Lily makes her rounds every morning and greets all the customers, otherwise she is lounging or sleeping on her bed. Ingrid enjoys four-wheeling and camping with her three boys. So if you see either Ingrid or Lilly around the pharmacy say Hi! 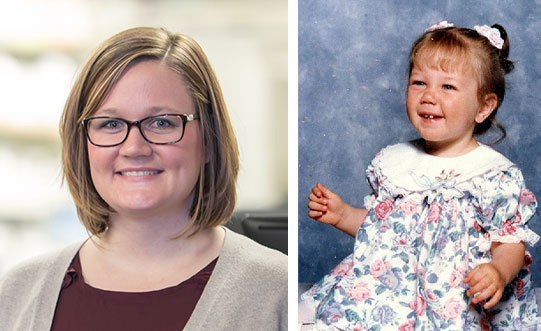 MISSY
Missy started at Omro Pharmacy in November 2018, after leaving a 9 year career in early education. In July, she had a son named Reed, but also has a stepson named Wyatt who is 10 years old. In her free time she loves to go camping, to truck pulls, fairs, and bass fishing. She also helps out on the family farm with cash crops! 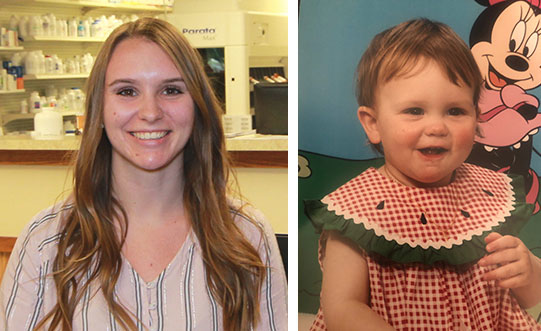 SARA W
Sara began working as a pharmacy technician at Omro Pharmacy in May 2019, following her graduation from UW Madison. Sara has a Bachelor of Science degree in Neurobiology and Certificate in Global Health, and will be starting pharmacy school this fall at Concordia University Wisconsin. When she is not busy with schoolwork, Sara enjoys spending time with her family and friends, kayaking, and attending Badger football games. 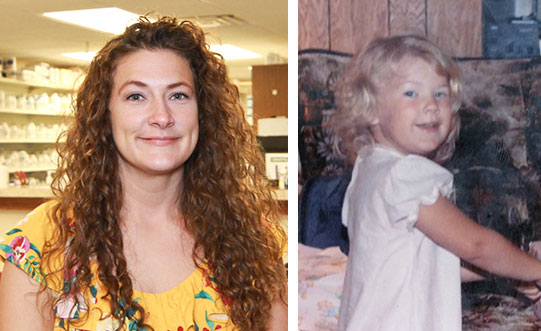 SHEENA
Sheena is customer service here at the pharmacy. She joined our team in May of 2017. When she isn’t helping our customers, she is enjoying time with her two kids. 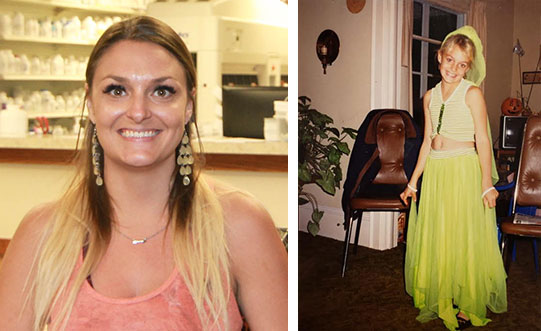 AMBER
Amber has worked in the pharmacy business on and off since 2002. She loves animals, music, brewers, and boating. 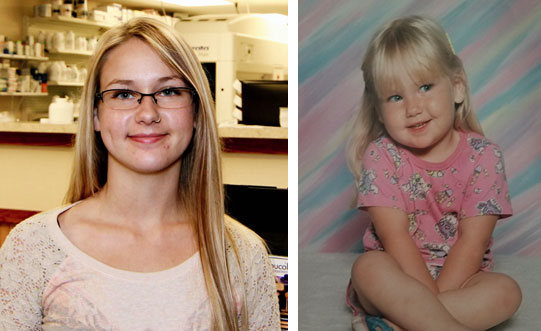 LEXI
Lexi has recently joined the Omro Pharmacy team primarily working as an Office Assistant. She is rapidly becoming familiar with many other functions of the pharmacy. She enjoys spending her free time one of two ways; either at home proudly being a cat mom, or out and about appreciating live music.

In Remembrance of Past Staff Members 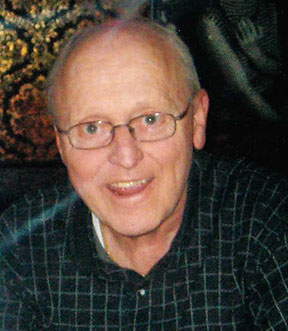 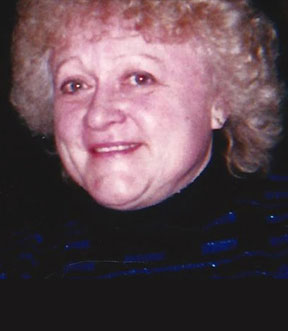 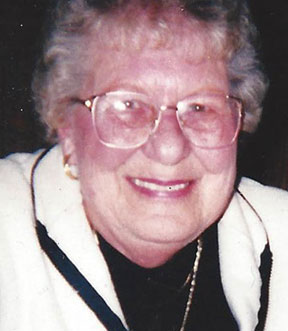 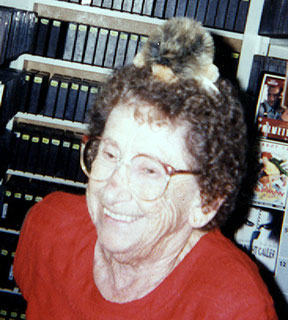 Order Refills/Access your profile from your web browser